KIRKLAND, Washington (December 7, 2020) – Some real estate brokers expect the competition for homes to ease somewhat over the holidays, but the latest statistics from Northwest Multiple Listing Service indicate activity is unusually strong heading into December.

“The rush is on for housing,” exclaimed J. Lennox Scott, chairman and CEO at John L. Scott Real Estate. “Real estate activity typically chills as temperatures drop but buyer demand remains high. “With low unsold inventory, all eyes will be on each new home that comes on the market,” he suggested, adding, “This strong demand is present in the more affordable mid-price ranges and extends into high-end homes.”

The Northwest MLS report summarizing November activity shows strong year-over-year (YOY) increases in closed sales (up about 23%) and prices (up 13.8%). Pending sales (mutually accepted offers) rose 7.9% from a year ago, and the year’s saga of depleted inventory continued last month with the number of total listings down nearly 43%.

Windermere Chief Economist Matthew Gardner said even though the housing market has started to show some signs of its traditional winter slowdown “activity remains higher than we would normally see at this time of year. This isn’t too surprising given the fact that the spring selling season was essentially cancelled due to COVID-19.”

Commenting on the low inventory, NWMLS director Meredith Hansen emphasized buyers need to be ready to compete. “Offers that have the best chance of acceptance are from buyers who are pre-approved with a local lender or have cash. Buyers also need to be prepared to have a pre-inspection in order to waive that contingency, and be ready to escalate in price if necessary,” suggested Hansen, the owner/designated broker at Keller Williams Greater Seattle.

Although inventory is limited, a check of the supply by price range shows about 25% of the listings across the 23 counties served by Northwest MLS are priced under $400,000, and a similar number (24.4%) are priced from $400,000 to $600,000. At the high end of the spectrum, about 21% of homes and condominiums in the database have asking prices of $1 million and higher.

“With listings down 42.8%, record low-interest rates, and demand very high in outer suburban areas, it seems like the perfect price storm has hit,” suggested James Young, director of the Washington Center for Real Estate Research at the University of Washington.

While overall inventory is down, a comparison of counties shows a wide range of deficits, according to NWMLS data. Perhaps surprisingly, King County’s supply declined “only” about 18% from a year ago, while five counties (Clallam, Clark, Island, Mason, and Snohomish) reported drops of at least 63%. A closer look at the MLS report for all counties shows the shortages are most acute for single-family homes (off 50.6% area-wide), while the condo supply improved (up 7.1%).

Thirteen of the 23 counties in the MLS report had less than one month of supply at month-end. Overall, there were about three weeks (0.73) of inventory at the end of November, well below the four-to-six months, many analysts use as a gauge of a balanced market.

Commenting on the depleted supply, NWMLS director John Deely noted the absorption of standing inventory kept King County’s residential supply (single-family homes) at 0.67 months and condo supply at 1.88 months by the end of November. “These are indicators of a solid sellers’ market for both but reflect differences in the demand for these two types of housing,” stated Deely, principal managing broker at Coldwell Banker Bain.

Deely described the real estate market in King County as a “tale of two cities” in November, explaining, “While the residential market continued its trend of record-low inventory, the condo market holds record high inventory when looking at the second half of the year, compared to the same periods over the past eight years.”

For many first-time buyers, a condominium is a path to homeownership.

Economist Gardner said there have been some “interesting shifts in the King County condominium market.” While the supply of single-family listings across the county remains painfully low, condo listings are 39% higher YOY. “Some are suggesting the increase in condo inventory is COVID-19 induced, but I think it’s too early to call this a trend as condo sales are actually higher than a year ago.”

A check of Northwest MLS statistics shows condo listings system-wide are up more than 7% from a year ago. Closed sales jumped nearly 34% overall and condo prices increased by more than 11%.

The MLS map areas encompassing Seattle have about 61% more condo listings than a year ago; the Eastside selection is up 36%. Year-over-year condo prices in Seattle rose about 8.7% while on the Eastside prices on condos that sold in November surged nearly 32%. In South King County, condo prices jumped 24% on shrinking inventory (down nearly 33%).

“The lack of inventory in all price ranges has caused a ‘gold rush’ of buyers,” reported Dick Beeson, managing broker at RE/MAX Northwest in Tacoma-Gig Harbor. Noting inventory in Pierce County is at about half of last year’s selection, setting the stage for increasing prices, he said the coronavirus pandemic has not fazed the multitude of house hunters. “It is not deterring determined buyers who know that competing buyers from outside the state are floating into town with a boatload of cash from sales of their previous digs.”

One indicator of brisk activity is the ratio of pending sales to new listings. November’s 8,584 pending sales outgained the month’s new listings, which totaled 6,425 area-wide, continuing a pattern reported during much of the year. New listings surpassed pending sales for only two months (March and April) this year, resulting in the depleted supply of active listings.

Brokers reported 6,505 total active listings at the end of November, down from the year-ago total of 11,366. Supply was at the lowest level since February.

Despite the limited selection, Deely said buyer demand remained strong through November and is more active than in previous years. “Even though open houses were curtailed in mid-November, buyers were making in-person appointments to view properties and many desirable listings had solid activity right up to the offer review date,” he reported.

As Young noted, attractive mortgage rates continued to fuel demand. Rates on a 30-year fixed-rate mortgage fell to their lowest level, at 2.71%, for the 14th time this year, according to Freddie Mac. The record-low rates are allowing people to bid up prices, Young stated.

“November has been one of our busiest months for sales and closings in years,” stated Gary O’Leyar, designated broker/owner of Berkshire Hathaway HomeServices Signature Properties. “Consumer confidence in both real estate and employment have been the benchmarks of our strong real estate market,” he added.

O’Leyar said the COVID-19 crisis has many households investing more time and monetary resources into their primary residences, with many of these homes becoming primary workplaces as well. “I see this as an ongoing trend even as we move out of the COVID crisis into the next phase of the real estate market,” he remarked.

Dean Rebhuhn, broker-owner at Village Homes and Properties in Woodinville, said the “COVID Effect” is causing purchasers to want more space, both inside and outside. “Working and schooling from home, whether full- or part-time is the new normal,” he commented, noting buyers are finding suburban and rural solutions to these lifestyle changes.

Industry watchers say the in-migration of people from larger, more expensive locales is driven not only by low-interest rates, but also by workers freed by the pandemic to work from home long-term, and by a desire for more living space by those who are working remotely, supervising their children’s schooling, or accommodating adult children and aging parents who may have been displaced because of the virus.

Organizers of a forum for the Pacific NorthWest Economic Region (PNWER) said the rise of virtual platforms like Zoom has prompted knowledge workers to flock to new frontiers known as “Zoom towns” – scenic destinations where they can live more cheaply and “achieve a work/life balance which many never dreamed of achieving.” Speakers identified several “Zoom towns” including two areas in Washington, the San Juan Islands and the Methow Valley.

“People are seeking space and value since they feel working from home may be a feature of their lives into the future,” commented Young, from the Center for Real Estate Research. He said Chelan County’s price movement is notable, saying it reflects that trend. Prices for sales that closed in that county last month surged 36% from a year ago.

Kitsap County is among the areas experiencing double-digit activity in pending sales, closed sales, and prices. “Competition in the fast-moving market is fierce with buyers now using non-refundable earnest money and waiving inspections and financing. This is unprecedented compared to past markets,” stated Frank Leach, broker/owner at RE/MAX Platinum Services.

Leach said new construction in Kitsap County is at an “all-time high with numbers not seen since the ‘90s.” Even so, he said new construction is not keeping pace with demand. “That coupled with people looking to upsize for in-home offices or expanding families, or downsize for retirement, or looking for starter homes makes for an extremely competitive market.” Additionally, he continued, the sub-3% interest rates are converting many renters into homeowners. “This is a pivotal time for many and an opportunity of a lifetime to be a homeowner versus renting.”

KIRKLAND, Washington (June 7, 2021) – May was a month of record-setting highs and lows for some key housing market indicators tracked by ...Read More 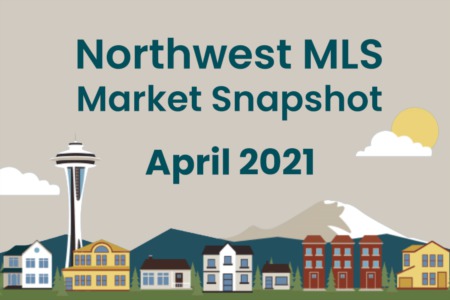 KIRKLAND, Washington (May 5, 2021) – Finally, some good news for homebuyers! Sizeable increases in new listings compared to a year ago ...Read More